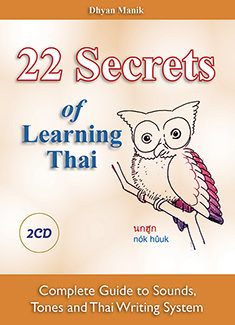 Twenty-two Secrets of Learning Thai teaches you all the sounds used in spoken and written Thai. It includes 20 consonant sounds, 18 pure vowel sounds, all special vowels and vowels combinations. It points out the main obstacles for learners, for example which Thai sounds are most difficult for an English speaker to produce. It then gives you handy tips to help overcome these difficulties. Much care has been taken to describe each sound in phonetic as well as in practical terms so that everyone should be able to grasp the correct way to produce Thai sounds.

The book has been designed so that it can be used by all levels of Thai learners. It contains a special exercise section, which teaches you in a step by step manner how to learn to read Thai script. At the same time all the Thai tone rules are taught in theory and practice. The student will get to know the most common Thai consonant symbols as well as rare symbols mostly borrowed from Indic languages, Pali and Sanskrit.

The book includes two audio CDs which feature more than 500 words spoken by native speakers to give you examples of how the words are produced in practice. In addition to individual words, the audio CDs feature many of the most common expressions used by Thai people in everyday conversation. This book is suitable for self-study and can also be used as an aid in the classroom. It contains a vast number of tips to assist you in learning Thai and understanding some of the crucial cultural aspects of the language.

This book and CDs will set you on the road to confident Thai language learning.

Save this product for later